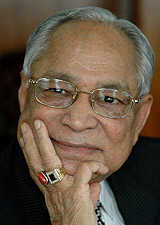 Mr. Samson H Chowdhury was born on 25 September, 1925. After completing education in India he returned to the then East Pakistan and settled at Ataikula village in Pabna district where his father was working as a Medical Officer in an outdoor dispensary. In 1952, he started a small pharmacy in Ataikula village which is about 160 km off capital Dhaka in the north-west part of Bangladesh. Mr. Samson H Chowdhury then ventured into a partnership pharmaceutical company with three of his friends in 1958. When asked why the name SQUARE was chosen he remembers - "We named it SQUARE because it was started by four friends and also because it signifies accuracy and perfection meaning quality" as they committed in manufacturing quality products. Now that small company of 1958 is a publicly listed diversified group of companies employing more than 28,000 people. The current yearly group turnover is 616 million USD.

SQUARE today is a name not only known in the Pharmaceutical world, it is today a synonym of quality- be it consumer product, toiletries, health products, textiles, agro vet products, information technology and few more. All these were possible due to his innovative ideas, tireless efforts, perseverance and dedication with self confidence which contributed to his successful achievements. Now the name "SQUARE" inspires trust. Under his dynamic leadership, SQUARE is set to continue its progress globally.